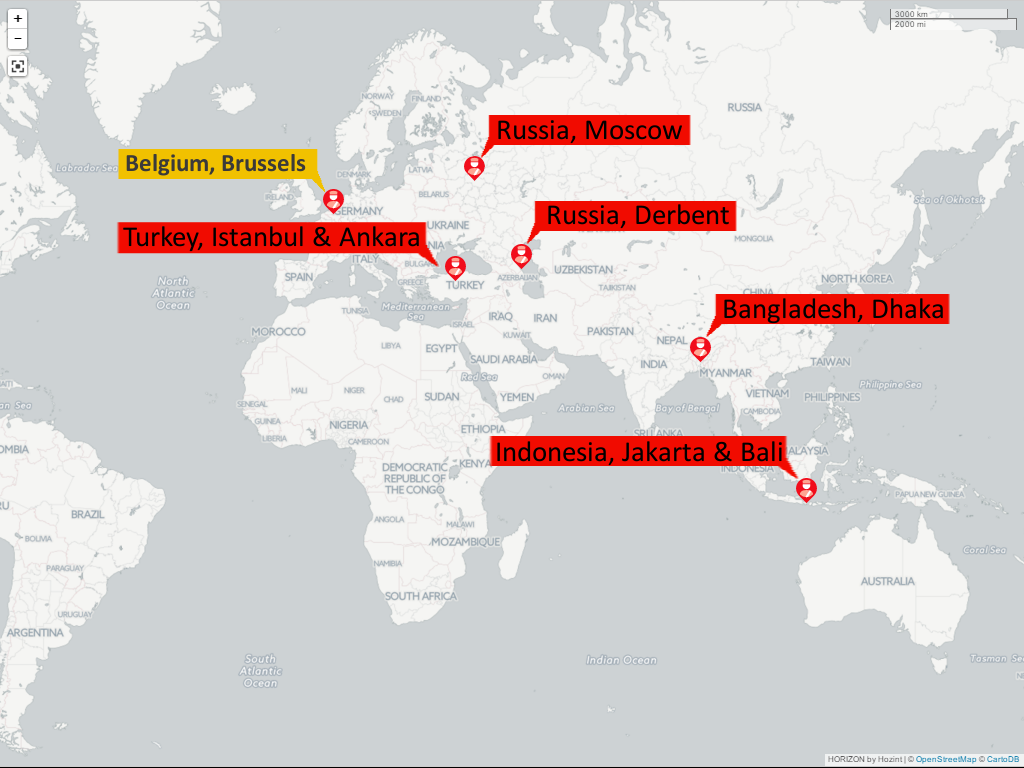 In the period between December 24th and 30th, a series counter-terrorism operations have revealed plots of terrorists attacks on the New Year’s eve in multiple locations across the globe. Most of the plots planned to attacks soft targets in bar, restaurants and touristic areas, while others targeted critical infrastructures such airports, train stations, metro and bus stations.

Here below we provide a short list of the recent threats identified by Horizon by following terrorism-related events in the month of December. The list is limited to the cases of discovered terrorist activities planning to attack between Christmas and New Year’s eve.

Bangladesh has experienced a number of terrorist-related incidents over the past months, including attacks on foreigners claimed by the Islamic State. Security agencies have arrested militants belonging to terrorist organisations, and some of them have an anti-Western outlook. Therefore, attacks remain likely, including against Western interests. In addition, touristic facilities such as hotels, restaurants and nightclub could be targeted by suicide bombers and shooting. Religious facilities and local religious minorities could also be targeted.

On December 29, the U.S. Embassy in Dhaka warned U.S. citizens of possible attacks against hotels and clubs in Dhaka in late December 2015, potentially in connection with New Year’s Eve celebrations. Additionally, Dhaka Metropolitan Police have announced increased security measures on December 31, including a prohibition on outdoor parties after 8 p.m. and increased checkpoints in Gulshan, Banani, Baridhara and the University of Dhaka.

On December 25, 1 suicide bomber died and 4 civilians were wounded in a suicide attack against a mosque of the minority Ahmadi Muslim group in Bagmara town.

On December 18, 6 individuals were injured after 2 separate Molotov cocktails exploded in a mosque inside of the BNS Issa Khan naval base in Chittagong. 2 individuals have been arrested for their involvement in the incident.

On December 5, at least 6 people were injured,in a series of bomb blasts targeting a Hindu religious gathering in Dinajpur district.

On December 2, an alleged terrorist was killed during a clash with Rapid Action Battalion (RAB) forces at Chakalampur in Chapainawabganj Sadar upazila. RAB forces were able to seize 1 pistol, 1 revolver, 6 rounds of bullets and 4 explosive devices.

Belgium has been on high alert since the terrorist attacks in Paris on November 13. Over the past couple of months, Belgian security forces have carried out several arrest operations aimed at detaining some of the suspects involved in the Paris attacks, as well as to curb radicalized cells in Brussels district of Molenbeek and elsewhere. The terrorism threat in Brussels remains moderately high as attacks are likely to happen. In addition, Paris attacker Salah Abdeslam remains at large, although it is believed he may have fled the country.

On December 30, 1 person was arrested by police in Brussels’ district of Molenbeek in connection with Paris attacks. Police carried out an operation in Rue Delaunoy, where Paris attacker Salah Abdeslam managed to escape on November 16.

On December 27 and 28, 6 people were detained, 2 remained in custody, in a series of raids carried out in Liège, Brussels, and the Flemish Brabant. The suspects were planning attacks against key touristic areas in Brussels. The threat level for police officers and police stations in Brussels was raised from level 2 to 3 due to a serious terror threat.

On December 22 a 9th suspect was arrested in Brussels during a police operation. His name and role in the Paris attacks have not been disclosed. He most likely provided support to the terrorists.

On December 20, Belgian police searched a home in Molenbeek neighborhood in the centre of Brussels and arrested 2 men, reportedly brothers, who are believed to be connected to Paris attacks.

The Indonesian Government has recently increased security across the country, which underscores the ongoing high threat of terrorism. In December 2015 police arrested a number of suspected terrorists in Central and East Java, planning to carry out attacks against touristic areas and Shia communities. Attacks are likely carried out by suicide bombers, but chemical attacks cannot be ruled out as laboratory equipment was seized during raids earlier in December. apart from touristic areas, Papua province remains a no-go zone due to frequent attacks by separatists militants.

On December 24, 9 terrorists planning attacks in Jakarta over the Christmas and New Year period were arrested by the police. According to the authorities, there are still some IS-linked terror cells at large that could be planning new attacks against tourist areas in Bali.

On December 23, the National Police Chief of Indonesia, General Badrodin Haiti announced the arrest of a suspected terrorist in Bekasi, Jakarta. The police chief said a raid conducted by counter-terrosism squad has led to the arrest of the suspect by initials, AM. He added that the suspect is thought to have links with other suspects arrested across Java earlier in the week. They were reportedly to have planned terrorist attacks in Jakarta during the festive season.

On December 20, Indonesian police arrested 9 terrorists in 5 cities across the country, who had been plotting to attack Jakarta on New Year’s Eve. During raids, members of an alleged terrorist network were detained for planning suicide bombings and chemical attacks, laboratory equipment and a flag inspired by the Islamic State were seized. According to the authorities, the group also plotted attacks on Shi‘ite communities on the islands of Java and Sumatra. Despite the arrests, Indonesian and Malaysian police declared high alert, as 13 areas vulnerable to attack have been identified.

Russia may experience terrorist attacks in the republics in the Caucasus, as well as in Moscow due it its involvement in the anti-Islamic State campaign in Syria. Over the past weeks, Moscow has been theater of a series of incidents, not all terrorist-related, that have raised the threat level in the capital. In November, Islamic State militants issued a new threat of an imminent attack on Moscow, using an underground WiFi network to send the message that ‘Paris was yesterday, Moscow is today.’ The WiFi network is used on Moscow’s underground rail system, with users attempting to log in immediately being shown a picture of the ISIS flag. Touristic areas, metro and bus stations, bar and restaurants may be targeted by suicide bombers, improvised explosive device (IED) and shooting.

On December 29, 1 tourist was killed and 10 other were wounded when unidentified gunmen open fire at tourists visiting the Naryn-Kala fortress in Derbent, Dagestan republic. The Republic has been affected with a long-running militant Islamist insurgency.

On December 16, a businessman from Dagestan, Mukhtar Medzhidov, was shot and killed by 2 unidentified suspects on Solyanka street in the center of Moscow. According to police, the shooting most probably was a targeting killing.

On December 14, 2 were killed and 8 wounded in a shooting near the bar “Elements” on Rodchelskaya street in Moscow. The incident was likely triggered by an argument among 10 people and involving private security guards.

On December 7, 5 people were injured by a small improvised explosive device detonated at a bus stop on Pokrovka st, 19 in the center of Moscow.

Turkey may experience terrorist attacks in different locations across the country, including Istanbul and Ankara, due it its involvement in the military campaigns against the Islamic State in Syria and Iraq and against PKK militants in the eastern regions. Touristic areas, airports, train and metro stations could be targeted by suicide bombers and improvised explosive devices (IED). Several arrest operations have been conducted in the month of December in Istanbul and Ankara that have reveled the presence of both IS and PKK militants planning to carry out attacks.

On December 30, 2 would-be suicide bombers members of the Islamic State were arrested by police in Ankara. The anti-terrorism operation was conducted at around 9:30 a.m. in the Mamak district. According to the police, the militants were planning to attack the Kızılay neighborhood on new year’s eve.

On December 24 and 25, 3 suspected Islamic State terrorists were detained  in Istanbul. The arrested were 2 Pakistani nationals, and 1 British national.  It appears that the Briton, identified as Hasan H., is in relation with Aine Lesley Davis a known British terrorist connected to “Jihadi John”, Mohammed Emwazi. It was not clear if the suspects were planning terrorist attacks in the city.

On December 22, a mortar attack against the Sabiha Gokcen International Airport killed 1 worker wounded another and damaged 3 aircraft. The attack was claimed by the Kurdistan Freedom Falcons (TAK), a splinter group of the PKK. However, Turkish authorities have not yet to confirm the authenticity of the claim.

On December 22, 2 PKK female militants were killed and 4 policemen were injured in a counter-terrorism operation carried out in Istanbul’s Gaziosmanpasa district.

On December 20, Turkish police detained a PKK suspect who is reported to have planted explosives under a road in Istanbul. The man was arrested late last night in Istanbul’s Beykoz district on charges of plating 8kg’s of explosive material under a road on the route of two Turkish military vehicles.

On December 14-15, the US Embassy in Ankara limited its services over a possible security threat. A similar warning was issued by the US consulate in Istanbul on December 8.

On December 4, a PKK female militant was killed in Istanbul’s Sancaktepe district. Police said the suspect was planning a suicide attack.

On December 1, 5 people were injured in a pipe bomb explosion at an overpass in Istanbul’s Bayrampasa metro station.