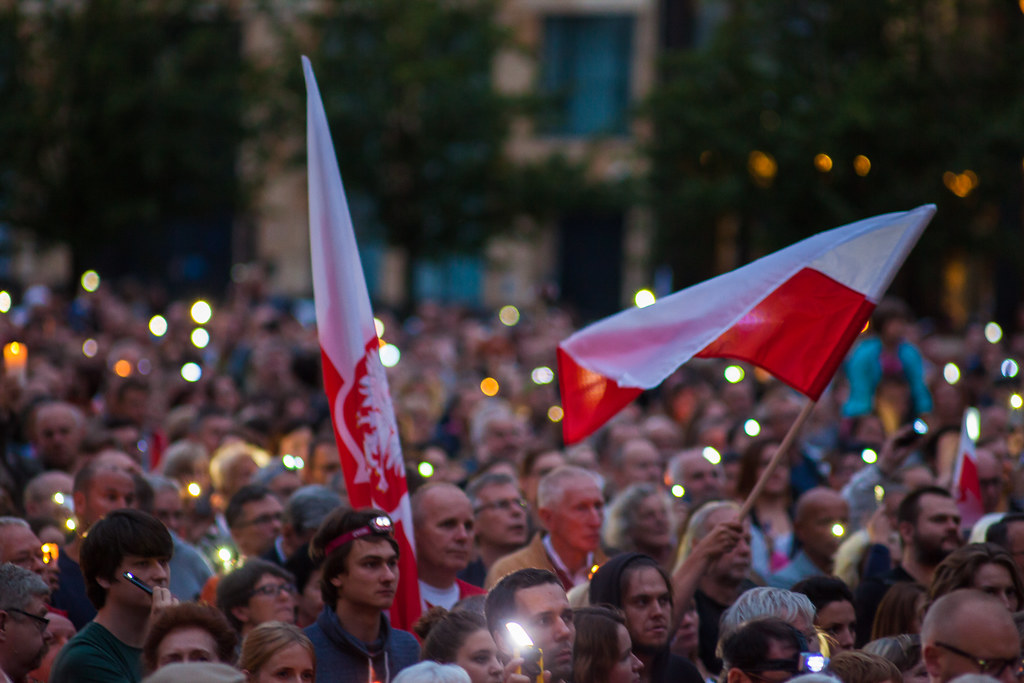 Poland | PiS, Protests and Polexit: the latest clash between Polish Citizens and their government

On October 10, protesters took to the street in over 100 towns and cities in Poland. In Warsaw alone, 80,000-100,000 demonstrators filled Castle Square in the historic center. The large-scale demonstrations were intended to rally pro-EU support and express discontent at the October 7 ruling by the Constitutional Court which some fear represents a first step towards “Polexit”, the exit of Poland from the European Union.

The ruling was prompted by a dispute between the EU and the ruling Polish Government of Law and Justice (PiS). The EU claimed the PiS was threatening judicial independence after a number of reforms were implemented to Polish justice, including the implementation of a disciplinary panel to oversee judicial independence. As such, the European Court of Justice ruled that Poland would have to repeal some of these reforms. PiS disagreed, claiming that the EU has no right to comment on the internal judicial functioning of Poland. The ruling was taken to the highest court in Poland, the Constitutional Tribunal. The verdict came on October 7, when Judge Bartlomiej Sochanski ruled: “The EU Treaty is subordinate to the constitution in the Polish legal system … and, like any part of the Polish legal system, it must comply with the constitution”. This was taken both by the EU and Polish citizens to constitute a threat to the supremacy of European Law, one of the cornerstones of the European Union, and as a result, challenged Polish membership of the EU altogether.

This is not the first clash of EU and Polish values. Recently, the national populist government has argued with the EU over LGBTQ, abortion rights, and media independence, so the move by the Constitutional Court is not altogether unsurprising. Indeed, the leader of PiS, Jaroslaw Kaczynski, openly welcomed the ruling.
Polish citizens in the meantime condemned the action, taking to the streets to express their discontent. EU membership is highly popular among Poles, being seen as the bringer of their economic transformation and freedom that the country did not see until the collapse of the Soviet Union in 1989.

Poland has seen a recent economic transformation, largely due to the support by the EU, rendering them the most important political player in the EU region of former communist parties. While good news for Poland of course, this development may lead to a shift in balance in Poland’s position in the EU. Currently, the nation is a net recipient of EU benefits, but continued economic development may eventually position them as a net provider of EU benefits, which they are keen to avoid. A timely Polish exit from the EU could present one way to achieve this result. This is unlikely to happen in the near to medium future, given the popularity of the EU with Polish citizens, and the importance of Poland to the European Union.

In the short term, more protests can be expected. In June 2021, anti-abortion protests across the nation after a court ruling to lessen abortion rights for women devolved into more general anti-government protests that lasted up to 100 days after the ruling. These protests blocked streets and demonstrators clashed with police and other law enforcement officials. The recent protests have remained largely peaceful, but future devolvement should not be ruled out. On an international level, we can expect more clashes between Poland and the EU, in particular concerning the recent closure of the Turow mine. The lignite mine was ordered to close the mine by the European Court of Justice in Luxembourg but has as of yet failed to do so and considering the recent judgment by the national Constitutional Court, is unlikely to act upon this order. This could heighten already tenuous tensions between the two, and indeed has seen the seeds of a miner’s protest taking root.

In the medium term, economic recovery from the coronavirus pandemic may be stunted in the country, given that the European Commission has elected to withhold funds Poland was to receive as part of a Coronavirus recovery plan.

In the long term, however, there exists a possibility that this action is part of a long-term political strategy to distance Poland from the European Union and encourage an eventual “Polexit”.