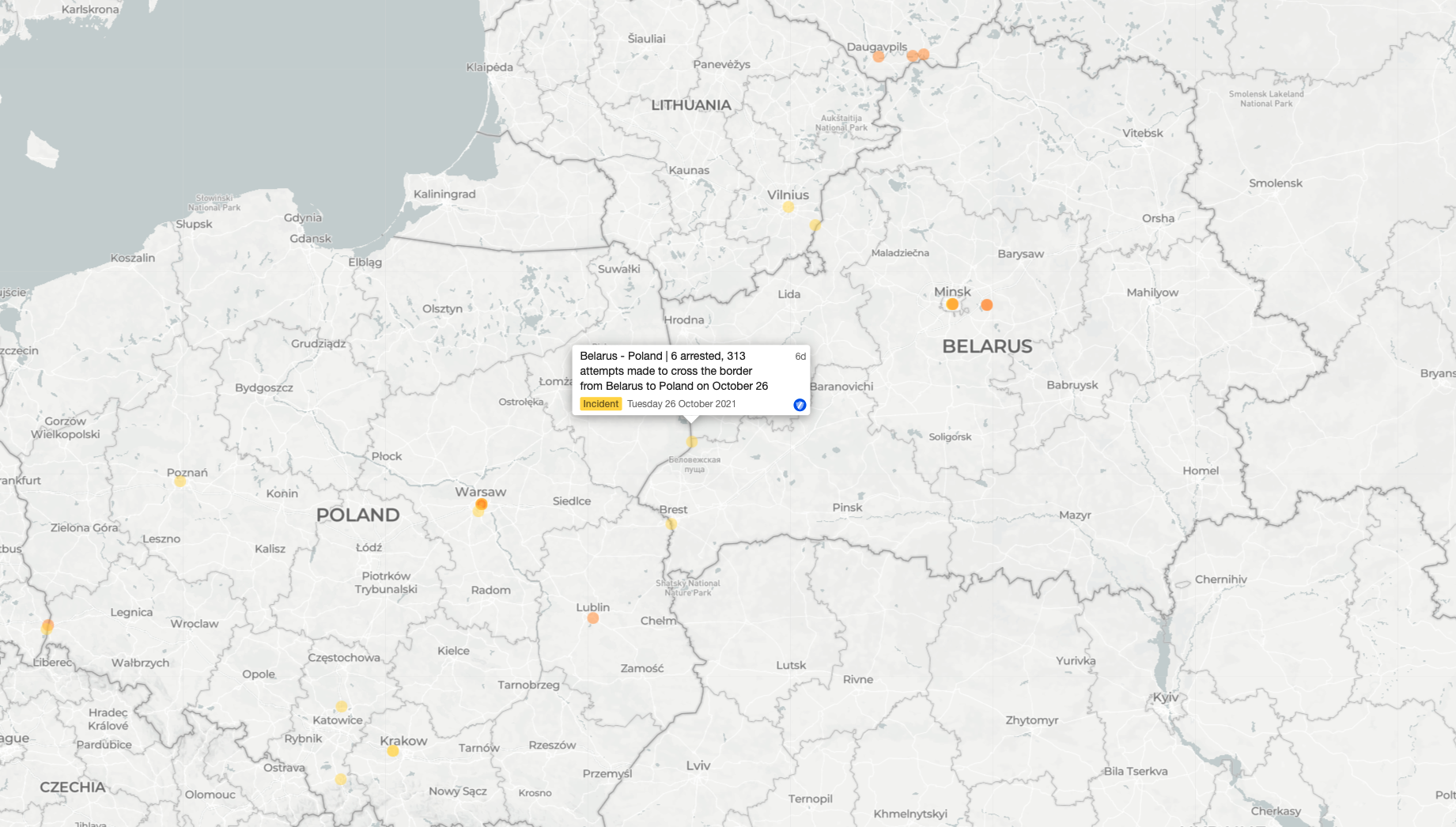 Belarus | The use of migrants as a hybrid warfare tactic

Since the spring of 2021, thousands of migrants, mostly from Iraq and Afghanistan, have been pouring across the border from Belarus into bordering EU countries. In July and August alone, Lithuania recorded 50 times more asylum seekers than in the whole of 2020. Poland, Latvia, and other EU countries have seen a similarly drastic increase of migrants arriving from Belarus. Poland, Lithuania, and the EU have all accused Belarus of importing migrants to punish the EU for its sanctions on the country. Lithuania, Latvia, and Poland have responded to the influx of migrants by issuing states of emergencies, building fences at the border, and sending thousands of border guards and military personnel to the border. Poland alone has 10,000 soldiers at the border. Within Poland and Lithuania, the crisis has sparked outcry and protests over the controversial method of pushing migrants back across the border into Belarus and the resulting deaths of several migrants.

While Belarusian President Alexander Lukashenko has denied the accusation that he is weaponizing migrants to punish the EU, the idea that thousands of migrants are transiting through the country without his approval stretches credulity. In any case, there is credible open-source intelligence detailing how Belarus arranges the migrants’ journeys into the EU. The migrants’ journeys often start with dubious Belarusian travel agencies that book flights, obtain the necessary paperwork and tourist visas, and help connect the migrants with smugglers. These travel agencies have actually been authorized to issue easy to obtain 7-day tourist visas. At the same time, smugglers have been using WhatsApp, Facebook, and Telegram to promote their services, such as transportation from Belarus to Germany or offering to arrange travel from Istanbul to Minsk. Belavia and Flydubai are the two airlines used to transport the majority of migrants to Belarus. The EU is currently considering ending aircraft leasing to Belavia over the issue.

Once the migrants are in Belarus, they are escorted to and helped across the border by a combination of Belarusian military personnel and human smugglers. If the migrants are able to successfully enter bordering EU countries without being intercepted, some continue their journey into other EU countries. For example, the German state of Brandenburg, which borders Poland, has seen a sharp increase in illegal migrant crossings in the past month. The majority of those detained report that they originally crossed into Poland from Belarus and entered Germany with the help of smugglers.

For Belarus, the creation of a migrant crisis as a hybrid warfare tactic is a relatively cheap option since the migrants are covering the cost of flights, accommodation, visas, and smugglers themselves. However, it is incredibly costly for the EU. Poland’s new border wall alone will cost over EUR 353m (GBP 297m; USD 407m). The cost of additional border patrols, operating detention facilities, and additional border security measures will cost EU countries hundreds of millions. The tactic also allows Lukashenko plausible deniability.

How the EU and individual countries choose to respond to this migrant crisis will determine the impact on internal EU dynamics. If the EU provides adequate support to the affected countries and other EU countries rise to support their fellow members, this crisis could provide the opportunity for closer cooperation on migration issues and even possibly alleviate internal tensions. Things are currently trending this way, with the EU pledging financial and logistical support and Germany’s recent offer of logistical and personnel support to Poland. However, if this migrant crisis is a repeat of the 2015 migrant crisis, the EU will likely face increased internal tensions, which is particularly concerning amid the EU’s and Poland’s ongoing conflict. The 2015 migrant crisis deepened internal divisions and distrusts, led to internal borders, and even played a part in the 2016 Brexit referendum. Currently, there is some internal tension within the EU on migration policy, with the EU refusing to finance border fencing and some EU members decrying the practice of migrant pushback.

A migrant crisis could also spark a far-right, xenophobic backlash in the affected countries. Comments from an Estonian official who told citizens to report “foreign-looking” people who might have crossed illegally do nothing to improve the situation. More recently, German police had to stop over 50 armed far-right vigilantes seeking to prevent illegal migrant crossings near the German-Polish border. Backlashes against migration in the past have resulted in strong, illiberal political movements that undermined democratic institutions. A great example is Orban’s Hungary, which seized on the 2015 migrant crisis to create fear in order to cement Orban’s authoritarian power and further erode democratic institutions.

This crisis raises the possibility that other authoritarian countries will choose to mimic this tactic. While this is not the first time a country has used migrants as a weapon (in 2015 Turkey essentially blackmailed the EU with a possible migrant crisis), Belarus’s artificially created migrant crisis provides a clear outline of how to attack and destabilize neighbouring countries with relative ease. Like other forms of hybrid warfare, such as cyber-attacks, a manufactured migrant crisis leaves countries unsure of how to respond. Whether the EU ultimately decides to consider this an act of war will be interesting to watch, but a military response is unlikely while Russia continues to back Belarus. The EU will likely continue with a hybrid response of their own in the form of additional sanctions and political isolation.