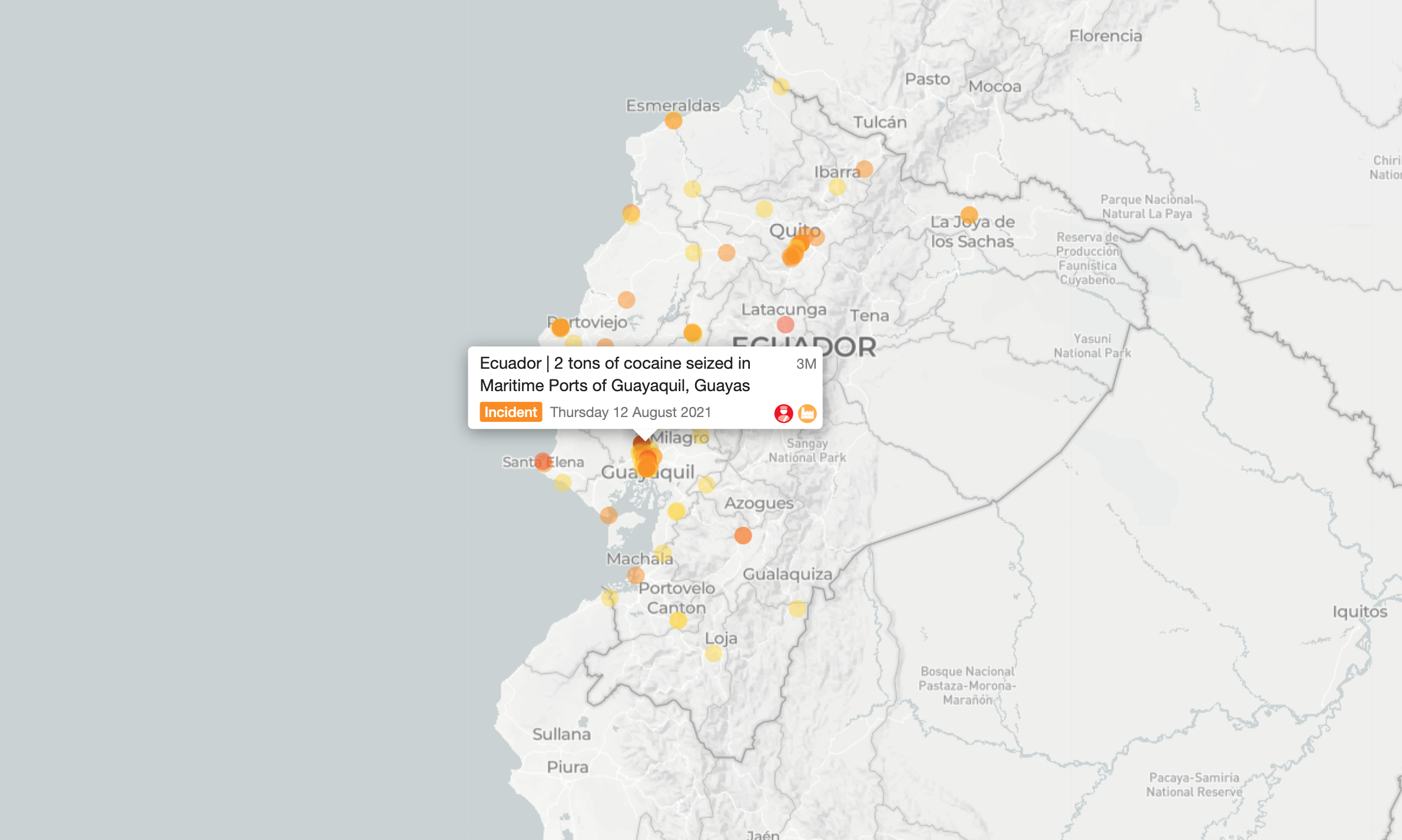 Ecuador | A new pivot in the metageography of narcotraffic

The dynamism of the narcotraffic industry in Ecuador is highlighted in three major indicators:

1) The increase in the number and volume of narcotics seizures:

The commander of the Ecuadorian air force, Geovanny Espinel, reported on August 23rd that in the first semester of 2020 the forces under his command seized 45 tons of illegal narcotics, and for the same period in 2021 that amount increased by 106.7%, to 93 tons. According to our information, most of the illegal narcotics passing through or originating from Ecuador have been seized in southern and northwest Europe and in the east coast of the United States.

2) The increase in violent death rates:

3) The increasing infiltration of Mexican cartels in the country:

On August 25th, 2021, the chief of the anti-narcotics police, Geovanny Ponce, stated that the Sinaloa Cartel and the New Generation Jalisco Cartel (CJNG) handle the high-level international operations of drug smuggling in the country with local partner networks. The chief also informed that about 40% of the cocaine produced in Colombia enters Ecuador to be temporarily stored and then shipped mainly to Europe and the United States. According to other security sources, the Sinaloa Cartel has over a decade of operations in the country, and the CJNG is less tenured in this operative theatre but more disruptive in its methods to claim territories and assert dominance.

Within the Ecuadorian territory, most drug-related incidents take place in three hot spots: the Ipiales-Tulcán Northern border area and the port cities of Esmeraldas (Northern) and Guayaquil (Western). Criminal organizations are focusing on efficiency by concentrating production and processing labs in the northern areas, closer to Colombia. This is one of the main features of the phase Ecuador is currently experiencing and how it is perceived in the metageography of international narcotraffic.

Another important feature, and perhaps one that bears the highest societal costs, is the consolidation of an internal market and the derived violence that accompanies the economics and operations of narcotics smuggling.

Ecuador does not have a consistent strategy to tackle organized criminal activities associated with narcotraffic. In the LATAM region, there is a notion known as the “balloon effect” in the international narcotraffic enforcement and prosecution that states that when state pressure increases in a given country, new nodes emerge that facilitate storage compounds, refreshment of operators, and safer routes, that can at least provisionally help reduce the perceived risk of seizure.

A peculiarity in the Ecuadorian context is that there is no regional effort (beyond the not-so-distant Colombia Plan) that may have increased the perception of risk of seizure in other countries of the region that would explain Ecuador’s expansion in importance for drug cartels. Thus, the emergence of Ecuador as a new pivot for international drug smuggling seems to be founded on the fact that Mexican cartels have increasingly complex strategies that allow for diversification and risk mitigation.

The Ecuadorian operative theatre will likely evolve similarly to that of Mexico. Therefore, constant clashes between rival cartels for the control of routes, the internal market for both weapons and narcotics, and the erosion of security and political institutions, can be expected.

State responsiveness and strategizing are unlikely to improve in the near future, especially considering the challenges posed to Lasso’s administration by the recent unveiling of the so-called Pandora Papers, which may increase political instability and force Lasso into focusing on his own “survival.”

Therefore, the only game-changer that could potentially produce a more favourable scenario for Ecuador in the fight against narcotraffic and criminal violence in the long term remains the US-financed “Plan Ecuador.” In Latin America any significant change in the effectiveness of the fight against narcotraffic requires foreign financing. As it was in the case of Colombia, back in the end of the 90’s the US launched Plan Colombia to train, finance, and coordinate internationally with Colombian authorities and others across the region to pursue drug smuggling. In the case of Ecuador, indicators are pointing in the direction of the country having a pivotal value in the narcotraffic logistic and value chain, therefore it is very likely that Ecuador will require such efforts in order to revert the current trend.

PrevPreviousSpain | Transportation workers expected to go on strike between Dec. 19 and 22
NextNew Zealand | Large scale protests expected across the country on November 13Next