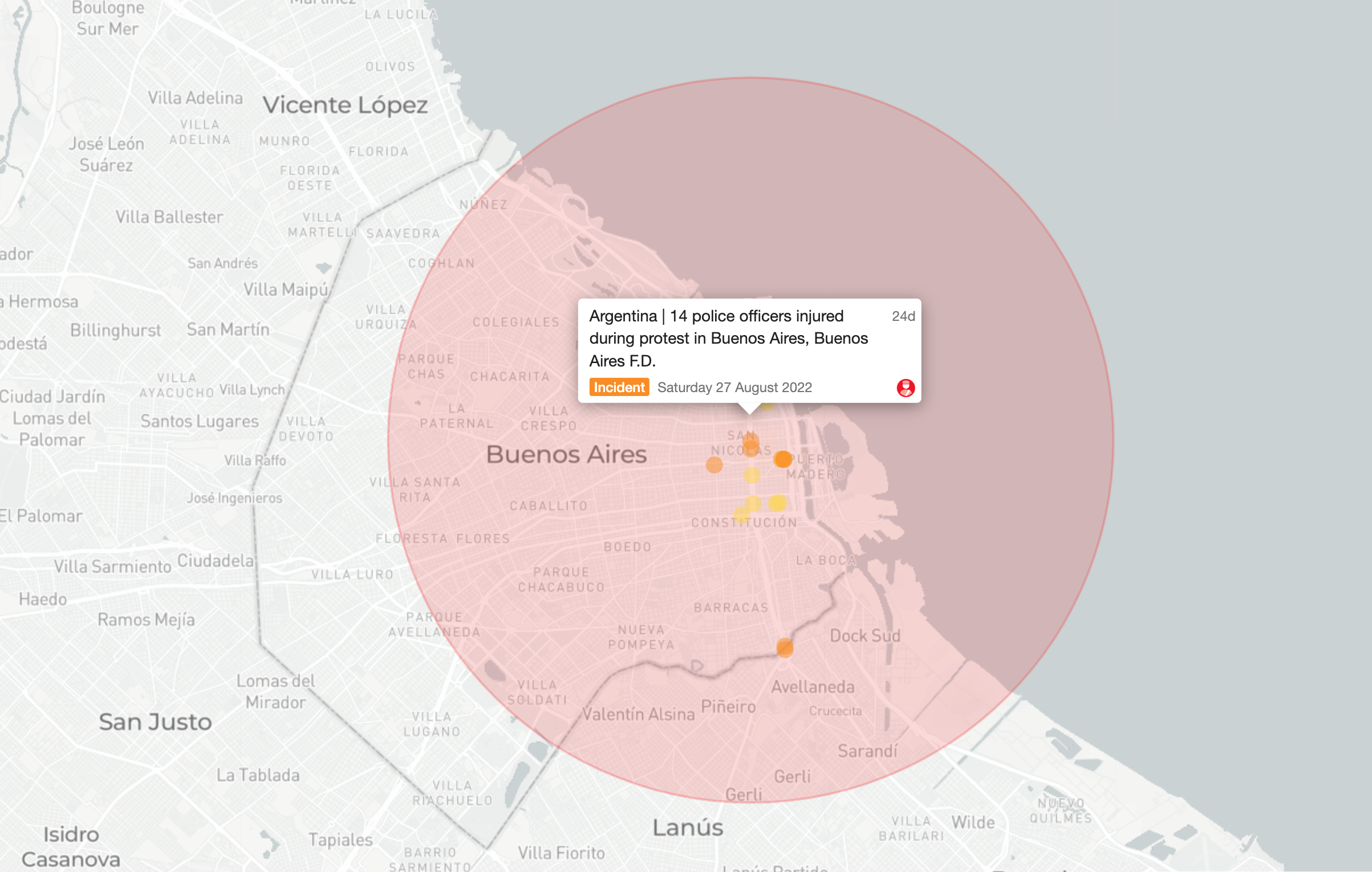 Buenos Aires: the hub for socio-economic protests in Argentina

Over the past few months, Argentina has been characterised by a growing feeling of social unrest. Large-scale protests have occurred on a monthly basis, mostly concentrated in the capital, Buenos Aires. While the protests are hosted by a variety of unions, groups or organisations, their motivations remain the same. Each protest is fuelled by the precarious economic and social situation in Argentina, defined by rising inflation, low salaries and poor social programs.

The most recent demonstration occurred on September 8, 2022, when the Frente de Lucha Piquetero held a march in Buenos Aires. Thousands joined and made circulation extremely difficult in the city. On August 19, a similar protest was held in the city to demand an increase in minimum wages. The list goes on and includes many more large-scale protests involving thousands of people in the capital. In nearly every case, traffic and travel disruptions were recorded. The trend of protests clearly indicates the fragile state of Argentina and the unpredictability of the flow of its capital.

Recent years have been socially and economically tumultuous for Argentina. In 2021, Argentina’s inflation rate rose to 50.9%. As of August 2022, the inflation rate currently stands at 78.5%. Inflation rates have been soaring, and salaries have failed to follow suit. Coupled with a weakening peso currency and high consumer prices, many have been struggling to feed themselves. As a result, large-scale protests have erupted, demanding a stable economic and social climate.

Due to their nature, the protests tend to attract a large number of participants. Some of the most popular unions host the demonstrations including the Unidad Piquetera, the Confederación General del Trabajo de la República Argentina (CGT), the Unión de Trabajadores y Trabajadoras de la Economía Popular (UTEP) and the Movimiento de Trabajadores Excluidos. The unions are able to assemble thousands of people to participate on a regular basis. At times, opposing marches are held on the same day in order to create further disruption.

Most of the marches are held in Buenos Aires as the city has been a hub for demonstrations for many decades. The social and economically fuelled marches tend to be concentrated in key areas of Buenos Aires.

Hozint data points out how in the past 6 months, most protests have taken place in the east of the capital, in the San Nicolás, Monserrat and Constitución neighbourhoods. The 3 areas encompass popular protest locations including the main plazas: Plaza de Mayo, Plaza de la República and Plaza de los Dos Congresos.Important protest intersections are also within the 3 neighbourhoods including Avenida Belgrano and 9 de Julio and Avenida de Mayo and 9 de Julio. The Obelisco is another protest hotspot in the area.

From their magnitude and strategic planning, the protests have been known to cause mass disruption in Buenos Aires. Some of the main streets in the 3 previously mentioned neighbourhoods have been completely blocked by protesters. Roads have been cut off making circulation difficult. Public transport has to be diverted or cancelled. Most protests usually begin in the morning and last all day, fully paralyzing the city.

According to data released by the Argentine government in August, inflation could hit 90 per cent by the end of the year. With a worsening economic crisis, the protests are not likely to slow down. Following recent trends, it is more than likely that the large-scale protests will continue across the country. Buenos Aires will remain a hub for the demonstrations and travel and traffic disruptions will continue to occur.

The demonstrations are not likely to diminish in size or change locations as the most important protest locations remain in the areas of San Nicolás, Monserrat and Constitución. If the economic crisis does worsen, protests may in fact increase in size, causing further disruption.

Argentine inflation has been projected to moderate to 61.8% at the end of 2023, demonstrating a decrease. The number remains high, however, making an end to the protests unlikely.