Peru: The 89-minute Coup and its effects

On December 7 at 11:47 am, President Pedro Castillo ordered the dissolution of the National Congress, a few hours before the scheduled parliamentary deliberation to impeach him. During his statement, Castillo also announced a state of emergency, a curfew, the restructuring of the justice system, the public ministry, the constitutional court, and an election to establish a constituent assembly to produce a new political constitution.

On December 14, the government declared a 30-day national state of emergency, which was expanded on January 15, with increased restrictions in Lima, Cusco, Puno, Callao, and Andahuaylas (Apurímac), Tambopata, Tahuamanu (Madre de Dios), and Torata (Moquegua). On January 19, it was expanded one more time to include Amazonas, La Libertad, and Tacna.

Despite Castillo’s administration facing persistent protests across multiple regions, December 2022 saw 3 times as many protests as November and 6 times as many during the first half of January 2023, with at least 120 simultaneously affected locations across the country, either by roadblocks, gatherings, or clashes between demonstrators and security forces.

Among the demands presented by demonstrators are the liberation and return of Pedro Castillo to office, the dissolution of Congress, and a constituent assembly to produce a new political constitution. In these demands converge multiple associations and social movements that consider their interests and expectations not to be represented by the current political order, not even by former Castillo’s party Peru Libre. However, the most plausible scenario, if the protest continues to escalate, would be an early general election, which most likely will be detrimental to left-leaning parties.

A look at the map of the ongoing protests suggests a high degree of planning, as most protests concentrate on limiting mobility and taking over critical infrastructure. Highways, airports, and bridges have been carefully targeted to block transportation, commerce, and the delivery of supplies required by strategic sectors like mining, which are leaving around USD 55,226,084 in daily losses. 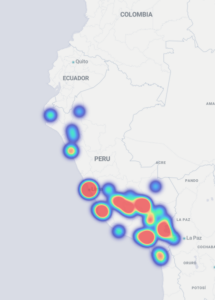 The allocation and timing of the protests also reinforce the notion of a high level of planning in the ongoing protests in Peru. Most of the protests have concentrated in the Southern Mining Corridor, which includes Apurímac, Cusco, and Arequipa, and are also areas where Castillo had more support from social movements and unions during the last general election.

Recent January surveys indicate that 63% of Peruvians believe the violence during protests to have been systematically organized by political movements, while 30% consider these to be spontaneous actions.

Local intelligence services claim that the protests are financed in a significant manner by illegal mining syndicates and groups associated with narcotraffic. The counter-terrorism directorate (DIRCOTE), also claims that militant organisations such as MOVADEF, Shining Path, and the Túpac Amaru Revolutionary Movement (MRTA) have engaged in multiple demonstrations, and allegedly in violent actions as well.

The involvement of illegal mining groups in the organisation of protests and violent attacks, fits into recent evidence of attacks against the MMG Las Bambas Apurímac mining field (January 16), the Hudbay Constancia copper mine in Cusco (January 19), and the Glencore Antapaccay copper mine (January 20), which caused the suspension of operations, after recording 3 similar attacks in the last month. These attacks alongside the installation of roadblocks have limited operations to about 38% of their capacity or completely paralysed them in some facilities.

The increasingly violent connotation of the ongoing protests in Peru is progressively wearing down the legitimacy of the demonstrating groups, and the main issue that the government is currently facing is being able to contain the situation by enforcing the law without excessive use of force, as well as holding officers accountable for already existing cases.

The underlying causes of the persisting political crisis in Peru are unlikely to be solved in the foreseeable future, even with new general elections. Thus, regardless of when new general elections will take place, a sense of democratic instability or impasse will continue to spill into the future.

The reciprocal undermining between Congress and the executive, which has resulted in the succession of 6 presidents in the last 6 years, could de provisionally sorted out through bargaining and compromise in a way that includes broader sectors, such as the competing illegal mining sector.

The general civil unrest situation is likely to gradually lose momentum in the weeks or months ahead as protests become more violent (losing media and public opinion support), and as economic losses become more tangible (tourism, internal commerce, and mining being the most affected sectors).

Despite the demands of the demonstrators, the timing for new elections does not represent any particular advantage for the left, considering that in the election as highly polarised as the ones in 2021, in which Castillo won with 50.125% to Keiko Fujimori who got 49.875%, the earlier new general elections are celebrated the greater the benefits the right may collect, considering the confluence of Castillo’s still fresh disapproval level of 71% and the decision to close Congress.

Having said that, the increasing evidence of the excessive use of force on behalf of security forces during demonstrations is currently a factor that may incentivise more intense protests, as seen throughout January 2023, and the handling of police accountability will exert an important effect on the already deteriorated credibility of the political institutions in the country.

PrevPreviousPolitics, Economics, Security, and Foreign Policy: What to expect from Lula’s Administration